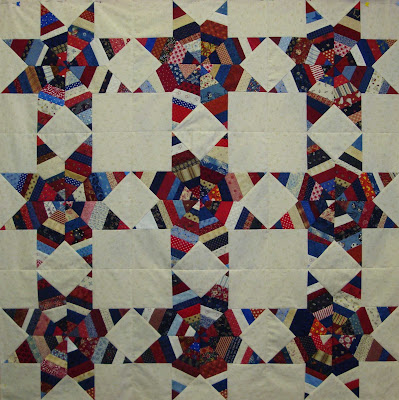 I was really hoping to get to a particular point of putting together some string stars before sharing that project again, but Murphy's Law has reared it's ugly head yet again. I was almost certain that when I foundation-pieced the string diamonds, I prepared ninety-six of the little suckers. I was aiming at making twelve star blocks. Well, I think I need to take remedial math (and counting?) because I apparently only made enough string-pieced diamonds to make eleven blocks. And I ask you, what normal quilt setting uses only eleven blocks? (Really...do you know one?)
I'm still not totally convinced that there aren't eight little string pieced diamonds lurking somewhere in my sewing area, giggling quietly and mocking me savagely...sigh.

So I went ahead and sewed nine of the blocks together, three rows of three blocks, to see how I felt about this little project. I chose not to sash them after seeing a similar antique quilt top somewhere. I wish I had added more medium blue strippy scraps along with the red ones, and maybe fewer neutral ones...that way there would have been more sizzle and pop!
Anyway, now comes my dilemma...to border or not to border. The antique quilt that I saw had no border, just neutral binding. But maybe it really needs a border or two to add some za-za-zing...what do you think?
After a hopeful, thorough search of my sewing area (and maybe Weasley's favorite hiding places - perhaps he was a bad kitty!), I will make eight more string-pieced diamonds and get on with this little quilt.

At the risk of you thinking that everything I'm working on is red, neutral, blue and SCRAPPY, I'll show you another project that I get out from time to time. I got the idea for this quilt in the February 2009 issue of American Patchwork and Quilting (may also be available for free at http://www.blogger.com/www.allpeoplequilt.com). 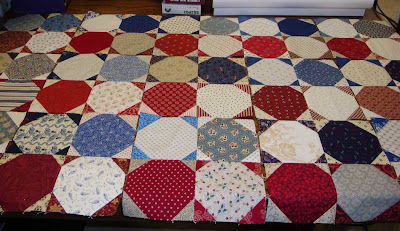 The pattern is simple...sewing little squares (on the diagonal) in the corners of a bigger square. Right now I'm making them in two by two units until I decide how much of this madness I can stand. This is another great way to use scraps. 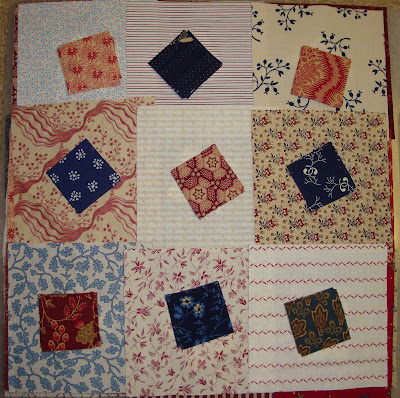 Here's the next batch of snowball blocks, cut out and ready for some serious chain piecing and a good movie.
Oops...I just remembered...I have another red, neutral and blue scrappy project in midstream. Perhaps I am in a rut? More likely, I'm just lazy. My scraps are segregated by color, and once the red, blue and neutral bins are out and the cotton is flying, it is easy to cut out things out for multiple projects all at once. 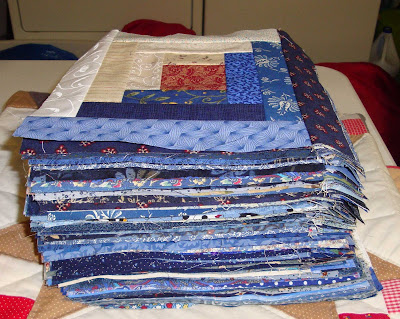 Which gets me back to my original thought of Murphy's Law as applied to scrap piecing; perhaps my corollary to the law would be "maybe it is possible to be too organized when it comes to scrappy piecing." While it is nice that all the blue stuff is in one bin, it makes me less likely to throw in the odd color that would add some sparkle and movement. I'm still trying to figure out what works better for me...sorting scraps by size with all colors heaped together, or keeping colors segregated. Maybe the creative process works better with a little more chaos and sloppiness and less OCD!
Maybe "scrap piecing" and "organized" just don't go together.
I'll show you these little gems next time!! Am I the UFO queen, or what!! Keep those needles busy...idle hands do the devil's business (or so I hear!).
Teresa :o)
Posted by Teresa Rawson at Saturday, June 20, 2009 1 comment:

It's politically-CORRECT to get all "Mavericky"

Well friends, I have really enjoyed playing around on Bonnie Hunter's site, http://www.quiltville.com/.

I love her instructions for making Maverick Stars. It's like Gwen Marston's liberated stars (so I've heard), and requires no templates and absolutely no worrying about star points! I challenge all of you to go to her site, find the directions to "Maverick Stars" on the right-hand menu of free patterns, and start playing!

Since I have a disease of not being able to throw away ANY LITTLE CRUMB OF FABRIC SCRAP, I am always looking for new ways to give life to these little cast-offs. It's very satisfying to use them up, and the variety of fabrics makes a scrappy project never dull. Sometimes I am afraid to allow myself to try really original and crazy stuff while sewing because I'm afraid of failing and 'wasting' good fabric. Heck, the scraps are already "waste," so I'm trying to let go of the needless worry.

"Strung Out" in My Basement 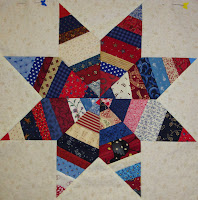 I have been having some fun with Bonnie Hunter's website that shares GREAT free patterns and ideas for managing and using scraps. I made this 8-pointed star using the WONDERFUL directions embedded in her pattern "Out On a String."

Her site can be found at http://www.quiltville.com./

I tried making one block using her directions exactly, including the half square triangles in the corners. This was fun as well, but I wanted a slightly larger block so that I would not have to make so many of them for the quilt I have in mind. I will make more of her blocks as well so that I can make her quilt. 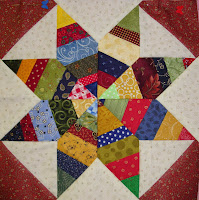 Bonnie's site is a good place to waste some time...she shares her methods for keeping her scraps under control. I don't know why I'm so drawn to the scrappy projects when I have yards and yards of new fabric "calling my name." I think I like quilts that represent the pioneer spirit of making do and using things up. And best of all, I don't have to make any fabric choices because I can use ALL OF THEM!!

So, what are YOU working on?? 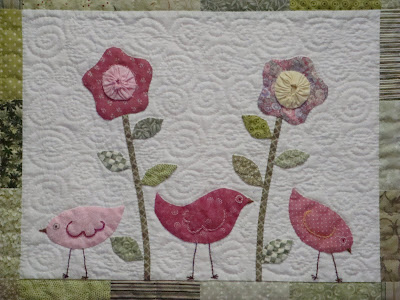 Hello everyone! I decided to try blogging to share quilting ideas and projects with my friends, old and new.

My idea is to post about what I am working on to invite comment and pictures from friends to further this collective creative process. I hope to share my quilts, patterns and new discoveries in tools, fabrics and projects.

This will probably seem very crude at first until I get the hang of it. But bear with me and check in often!