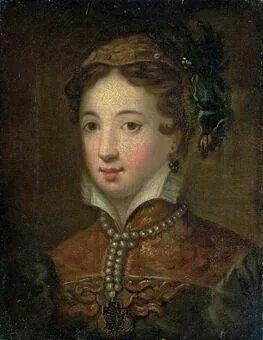 Yes!  More blocks for "Queen Mary's Garden."  It has been fun cranking up the brain and thinking about all this again.  It's amazing what the brain can do during long car trips.

I mean, we are all on some degree of house arrest with this horrible Covid 19 virus.  It gives me an excuse to ponder the important things in life...

...like, what the heck is up with the flora nomenclature of this early 17th century stitchery?!? 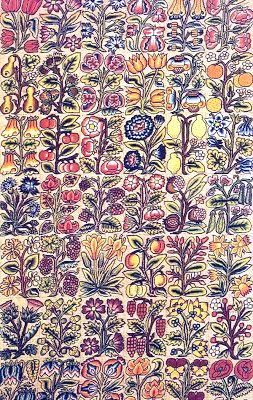 I look through the motifs above and there are definitely things I recognize, like tulips, daisies, lilies, and pears.  But then there are some completely wacko items.

I read that even though the "Herbals" were being illustrated and published at the end of the 1500's, early entries weren't in color and perhaps not quite true representations of shapes and attributes.

Then, of course, the man whose job it was to draw the thin, black outlines on the canvases for Mary, et.al. might not have been completely accurate in his interpretation.  There were men like this working with circles of royalty and noblewomen all over England and Europe, and they had their own discerning eyes and imagination as well.

The following is what Mary and her merry stitching group had to work with (the heavy lines are already covered/outline-stitched in black, thinner ones are inked and ready to stitch). 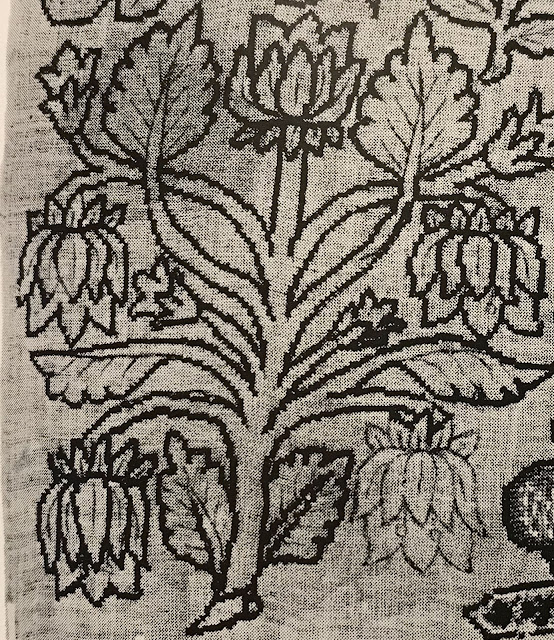 It was probably just like getting a coloring book and a 64-count box of unused Crayola's (with a sharpener)!  Yahoo - lets make up some flowers!

And certainly Queen Mary, her close ladies of the Court, and attendants were not familiar with many of the flowers depicted on the waste cloth.  The herbalists sketched plants and flowers from many places, not just Scotland.

When they tent-stitched the flowers, more often than not they picked colored silks that they liked or what would fit well with colors nearby, not what actually appeared in nature.  And the blooms with which they weren't familiar just gave them more license to use any color desired.

Well, I thought that I would be really smart and try to identify all the fruits and flowers and get the colors as accurate as possible.  Well, you can guess how that went.

Inspiration for these four blocks... 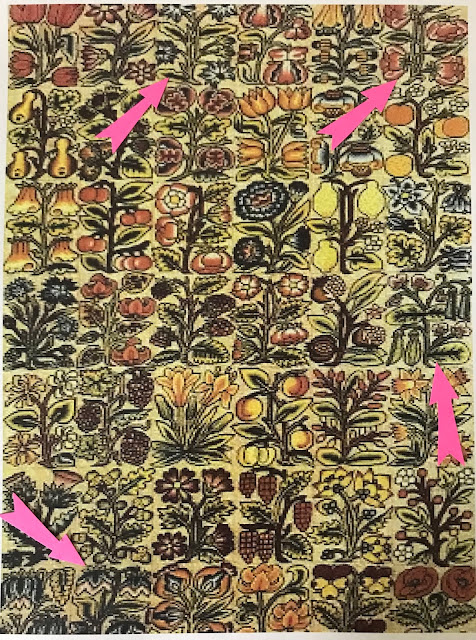 I had no idea about this first one.  I looked online trying to find out what it was and failed.  Then, of course, being frustrated, I changed the color to something I really liked to make me feel better and made up a name (blue is my favorite color - not enough blue flowers in nature).  Ha ha. 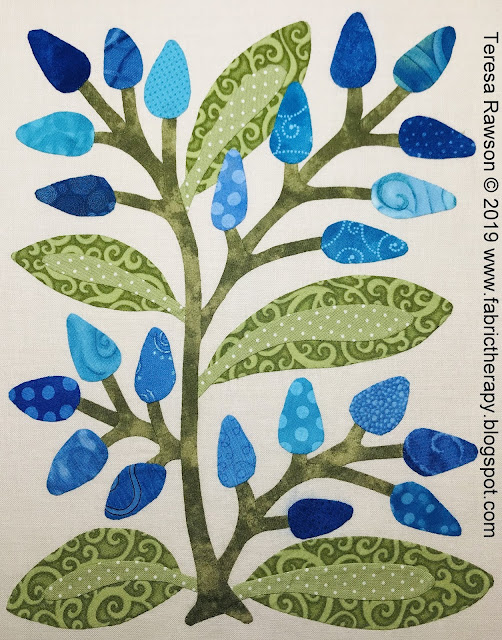 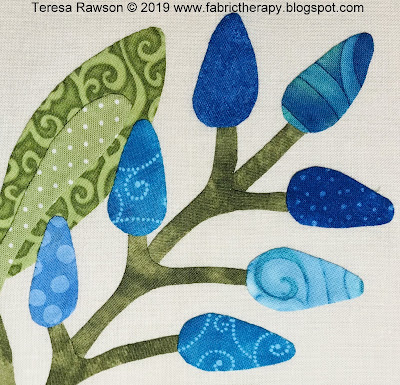 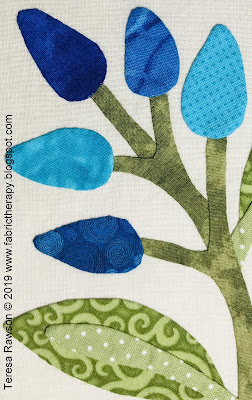 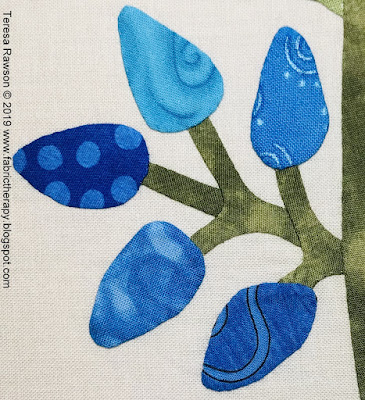 So, the Genie is out of the bottle, my friends.  I felt free/justified to just start making things up...even names.  I decided that even though there aren't tiny leaves drawn at the base of every bud, I would name it with a real flower's nickname, hoping that the bud looks like this?  Absolutely crazy.

I was really close on naming the next one; blossoms were right,  but then the leaves didn't match up.  Oh well.  I'm still calling it "Marguerite Daisy." 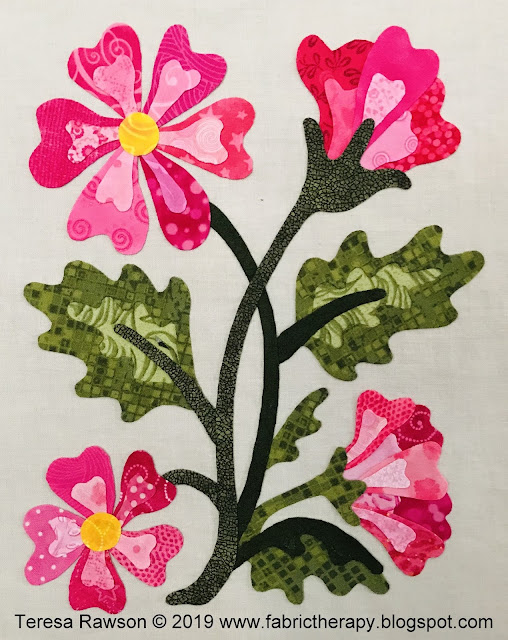 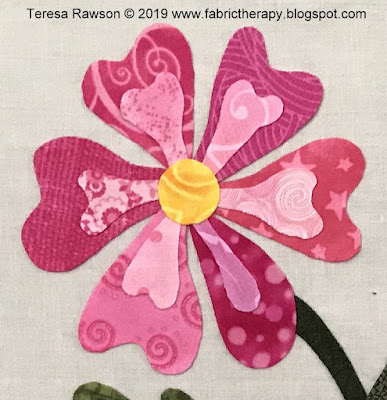 Then heck, I thought I recognized pears (although the ones on this stitchery looked a little too much like boobs).  I redesigned the pears, brightened up the drab colors with unnatural blue blossoms, and noticed, again, the leaves weren't correct.

This is "Concorde Pear." 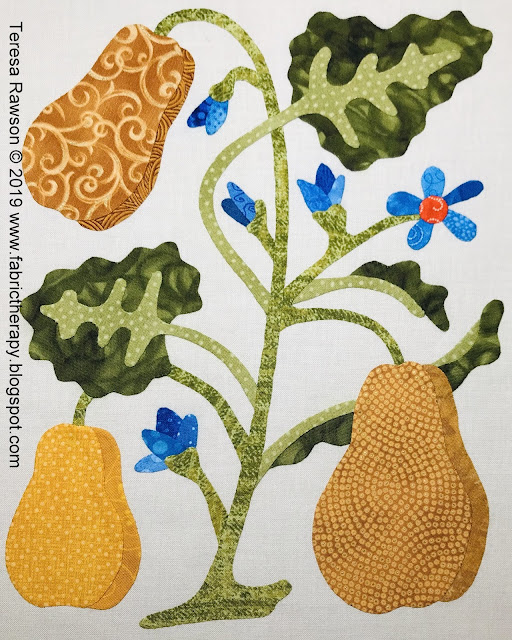 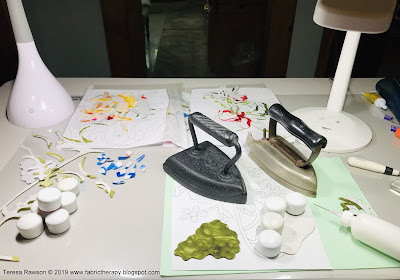 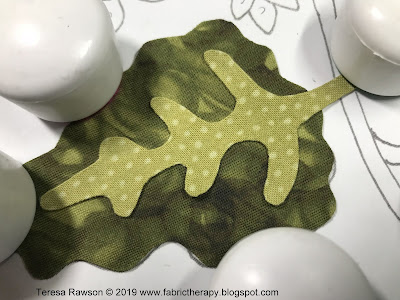 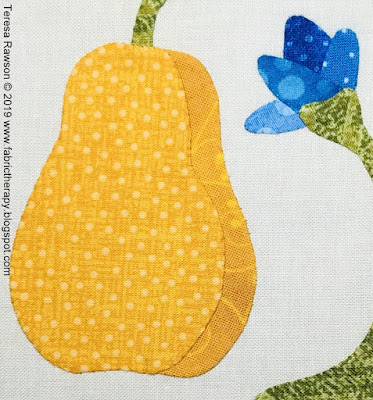 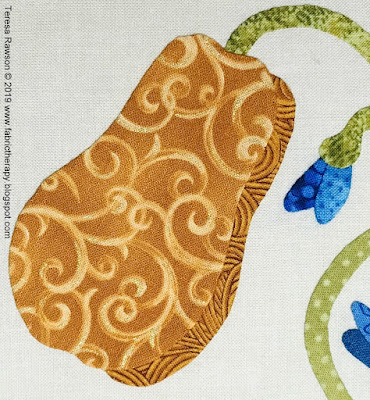 So now I just don't care.  In Michigan I had some little dwarf lilies like the next one, but my leaves were blade-shaped.  Meh...I call it, "Little Dwarf Lily." 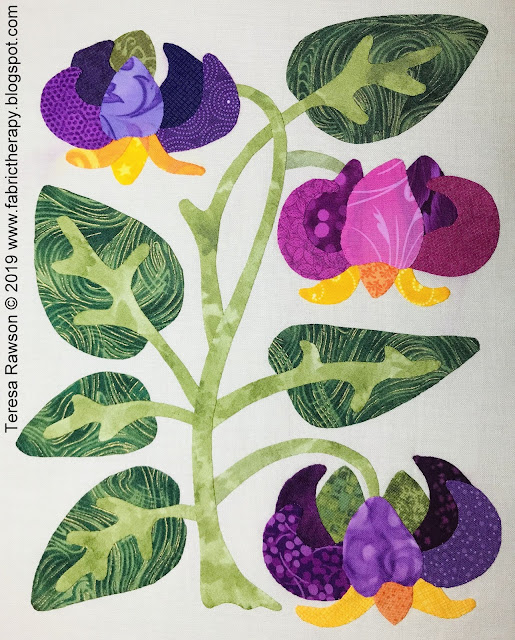 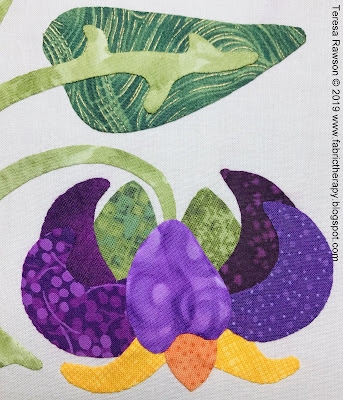 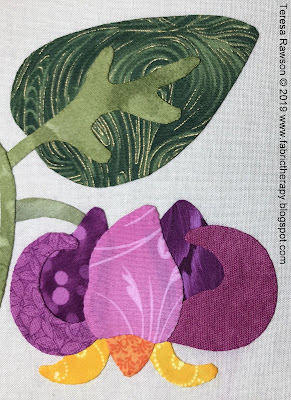 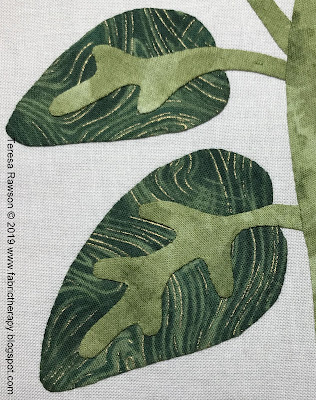 I did a great deal of "research" today (wink, wink), and I have come up with real names/varieties and nicknames or completely made-up nonsense.  Oh, it took thought...I had to pick names that would work in the early 1600's (no "Georgia Peaches").  I tried to pick varieties that grew in Scotland, Britain, France, Spain, or Italy...not easy to do since some motifs are tropical, and unspoiled shipping was impossible from tropical growing regions.

So now I finally have 49 names, some complete CRAP, but it was a fun exercise either way.  I have gone back and named the other 7 blocks you've seen...enjoy the nonsense where it happens...it will most likely only increase from now on.

On a personal thread, it is good to be home.  Steve's Dad died, peacefully, nine days ago in PA.  Late Stage Parkinson's is supposed to feel like being in a body that is becoming evermore rigid and entrapped, and accelerating.  Swallowing became impossible, followed by the inability to get enough breath.  Every time I would come home to AL for a few days, I would return to PA only to notice faster decline, which was really a blessing at that point.  Thank God for morphine and the encompassing love of his three kids and spouses.

Getting ready for the auction, we found letters that had been saved (someday, our kids and grand kids will be presented with a flash drive containing our emails and passwords to our social media apps).  We all read letters on our "shifts" and re-told funny times we all shared.  Steve, David, and Sue saw a whole, beautiful side of their parents and grandparents they had never seen.  Everyone got to share everything they wanted to say.

I missed that with my parents.

Then the virus emerged.  I was supposed to drive from PA to Atlanta, picking up Steve from his pre-arranged flight, and we were to go our little actress daughter's opening of the play "Helvitica."

Well, he definitely wasn't going to fly, so we drove south together.  The show closed before it ever opened.  We were there on opening night, and they, quietly, did it for friends and family.  It was so good!  I feel so sad for them.  Somehow, they videoed it the next day to stream on UTUBE, with permission from writers, etc.  They all worked so hard, and this virus has hit a terrible blow to all small-venue arts all over this country.  Really, to everyone in ways we have not thought of yet.

AND she got laid off, of course from her barista job at an ultra fancy dessert/coffee establishment ($15 per slice or serving of dessert, then there's the coffee).  BUT, she is holed up with 2 roommates she loves, has provisions, and texted me today that 'she is constructing a new character for D and D gaming'.  NERD!!

Her roomie Joe still has his job at a pizza place, for pick up only, for now.  So, he brings home a pizza every now and then.  They try out recipes, hold Katarina's emotional-support-cat, watch movies, etc.  They understand how serious this all is...but they are just having a ball, in quarantine.  Depending on age group, everyone will have different memories/experiences from these terrible times.

Memorial Service will be postponed for a few months...will have to go back for our tool auction and house emptying, but everything is off for now, so who knows.

Be safe out there and just treat it like a sewing retreat.  If husband/family becomes a little much, just a fake cough or two...