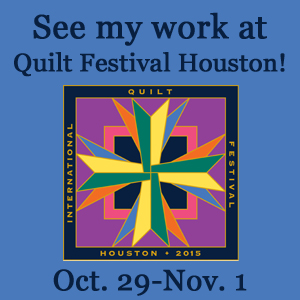 I'm still here!  I will catch you up with my quilting, my finger, my move from Michigan to Alabama, and last but not least, the furry wonder kitty, Mr. Weasley.

First, a funny story (and cautionary tale) about the International Quilt Festival in Houston.  In the middle of all the confusion of packing and my daughter graduating from high school last spring, I decided to enter my "Baltimore Rhapsody - Symphony" into the upcoming fall festival spectacular. 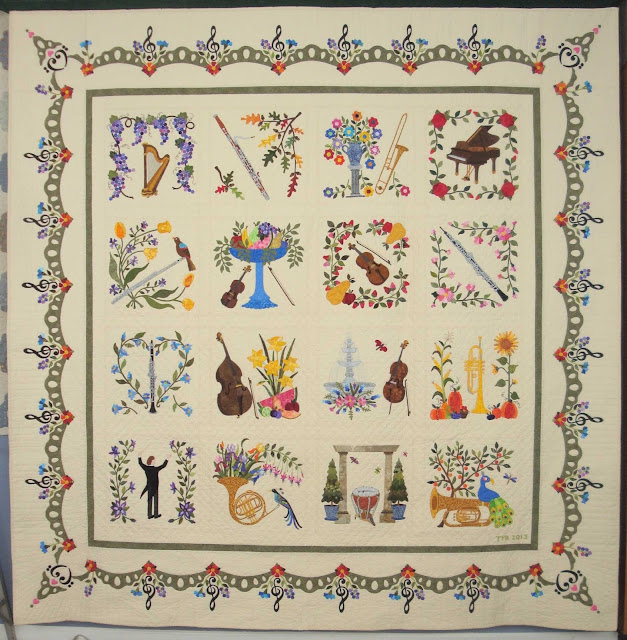 I found their web site a little confusing and hard to navigate. Maybe that is because I am used to the AQS site/contests and the magnificent Andrea Ray and company who make the process very easy and user-friendly.

Anyway, somehow I entered an EXHIBIT at the show rather than the SHOW ITSELF.  I have been a 'bear of very little brain' since my parents' accident and loss in May 2014.  When I realized my mistake, I entered the show as well.  I figured I would fix things later, and really kind of thought I didn't have much of a chance of my quilt getting accepted into either group. 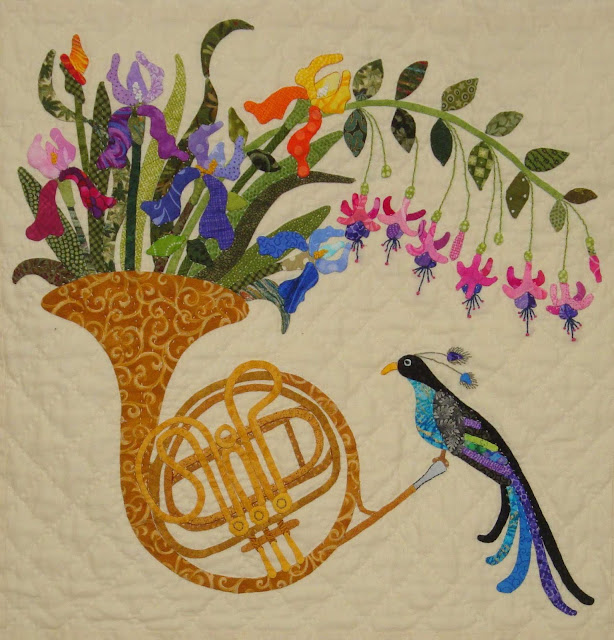 Well, I never heard from anyone from the contest, but I did hear from the people organizing the exhibit.  I got a nice email explaining what to do, when and where to ship my quilt, etc.  It will hang at the Festival, then travel to some other big shows around the country for a few months as a part of this exhibit, which I think is called "Quilts in the American Tradition." 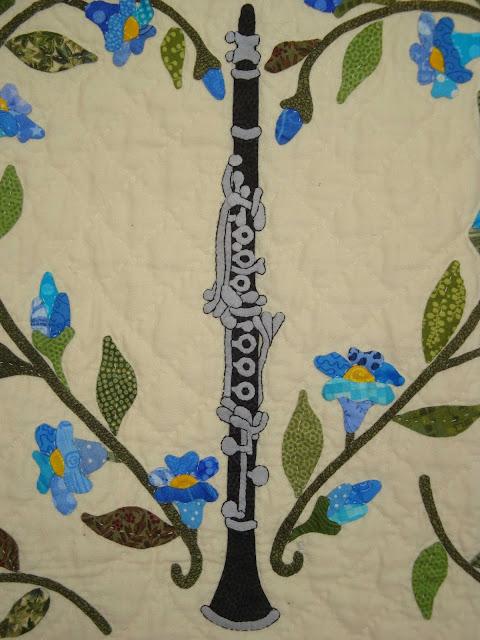 That sounded lovely and better than a sharp stick in the eye, and I felt lucky and happy to at least have it exhibited.  I did wonder why I never got a nice rejection email from the contest people...until... 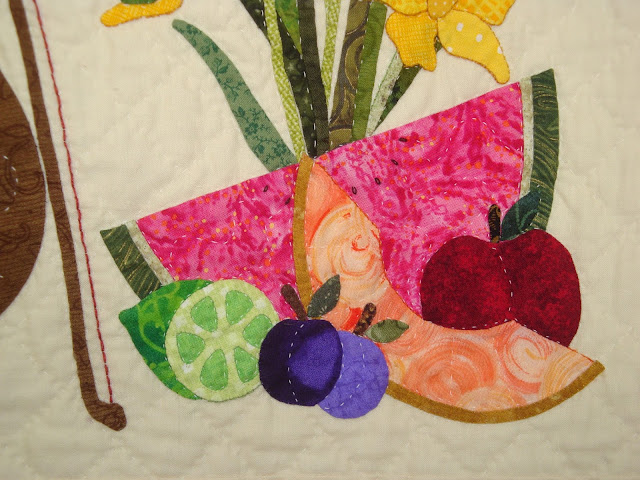 ...I was driving between Michigan and Alabama and got a call from Houston asking where was my quilt!  I panicked!  I had sent the quilt a week previous and had Fed Ex confirmation that it had arrived!  The call was from someone with the contest, not the exhibit, as it turned out. 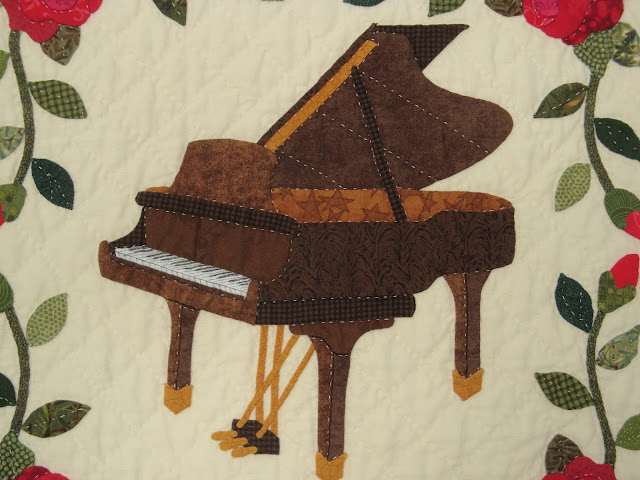 My quilt, afterall, WAS ACCEPTED TO THE CONTEST! They don't send out emails telling a person this, like AQS does...I had missed the fine print  where it said to go to their web site on a certain date to see if the quilt was accepted. My jaw was on the floor of the car!  But of course, the person on the phone was pissed that I had "double booked" my quilt. Oops! 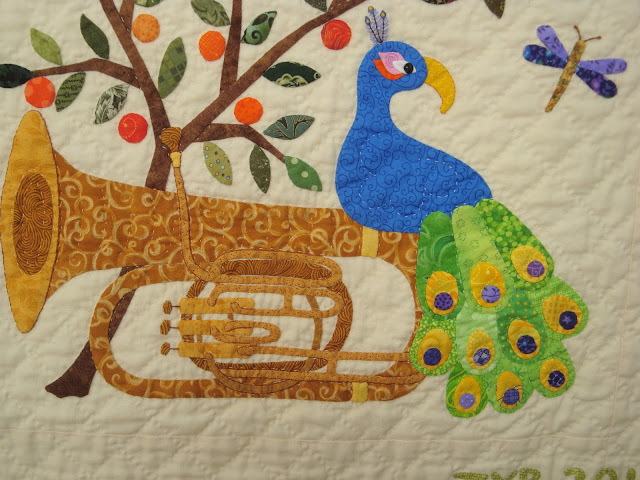 (It made me appreciate Andrea Ray and her merry band of cohorts at AQS for their organizational skills with all the many shows they put on...) 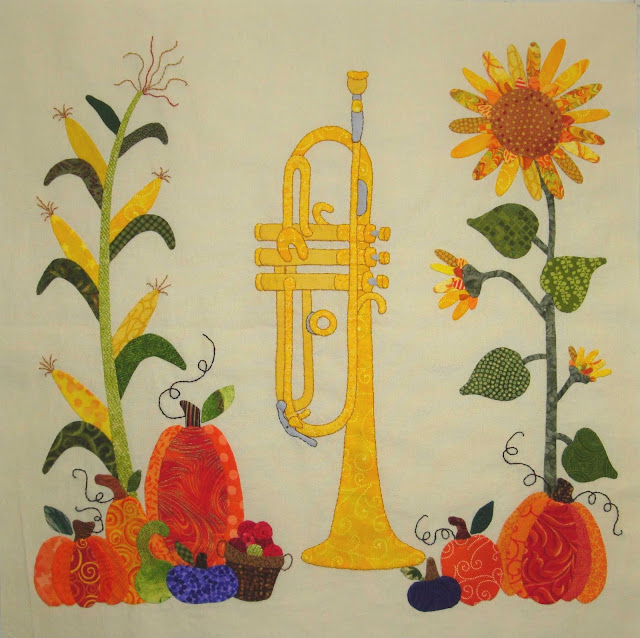 Oh well...my quilt WILL be at the show, but not IN the contest.

Second, my finger is coming along.  I can't quite bend it at a 90 degree angle, can't completely straighten it, but I am still doing home physical therapy, so I am still hopeful.  It is still swollen and I am wrapping it with compression tape a few times a day.

Also, I am rolling a lot of "snakes" out of putty to help with the scar tissue and pain at the incision site on the underside of my finger.  The tendon had to be repaired quite a bit because the cat bite infection was actually dissolving my tendon!  The scar on top of the finger is healing fine.

Thirdly, the move is progressing.  We are in Michigan this week packing up the last annoying possessions, cleaning, and doing some painting and little maintenance stuff in anticipation of turning the house over to the realtor this evening.  Over the last month, I had a terrible bout of sciatica, so I was flat on my back and in a great deal of pain for about two weeks.  During that time, we received the shipment of the piano and the second POD at the Alabama house.  I still have a little pain in one leg, but I am upright and doing the best I can.

I have been going through stuff in the Alabama house, getting ready to incorporate our stuff, which was unloaded from two PODS into an RV garage about 150 feet from the house.  This is going to be a slow process... 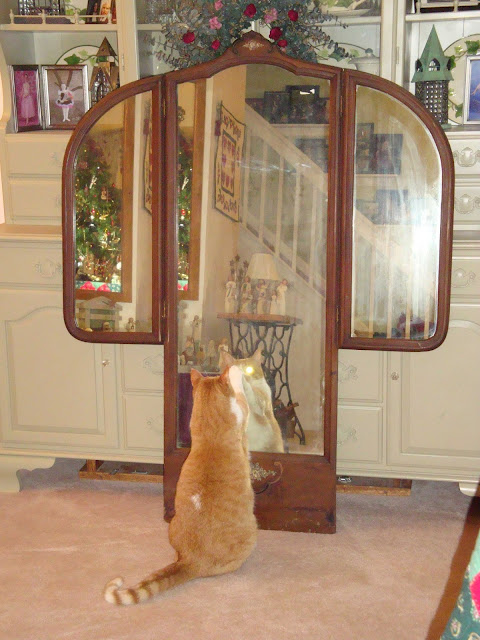 And last, but not least, the tale (and tail) of Weasley, our cat. We had to give him up, but he is happily situated with our friends and two new cat buddies.  He is fully integrated into the family and is getting along well with the two other cats.  I am sure he will enjoy his new brothers, as well as his new loving family.  I miss him terribly!  I still see him out of the corner of my eye.  I would love to go visit him, but I don't want to confuse him at this point.  Lucinda sends me updates and pictures, which reassure me, but also break my heart.  With Riley at college and Weasley in a new home, I am learning to let go...

I found a quilt store in Tuscaloosa, which is where my daughter is at college, but almost 3 hours from our Alabama home. PLEASE...tell me of quilty things in North Alabama, if you know of any.  I am going through withdrawal!