I am quilting like mad on my Joseph's coat quilt along quilt for baby Asa, but don't really have a picture yet.

So, I thought I would show some quilts that I did before I started blogging last year.  This is Bessie the Cow...she's a patriotic old girl... 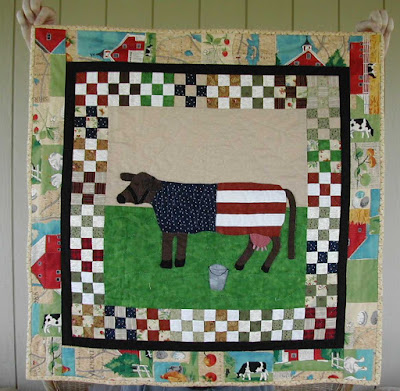 Check out the quilting on her chest... 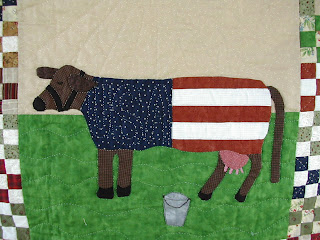 The one below is called One Room Schoolhouse, machine pieced and hand quilted, made for my daughter's kindergarten teacher (she is now going into 8th grade...when did THAT happen?!?). 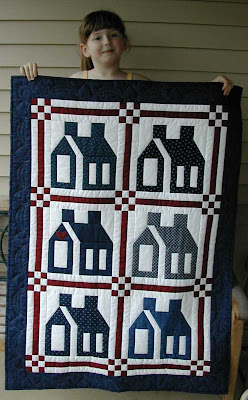 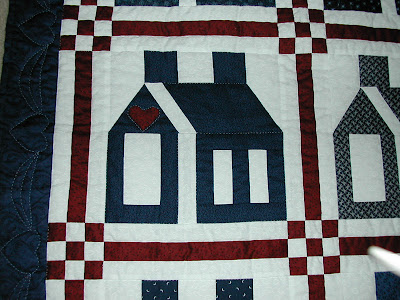 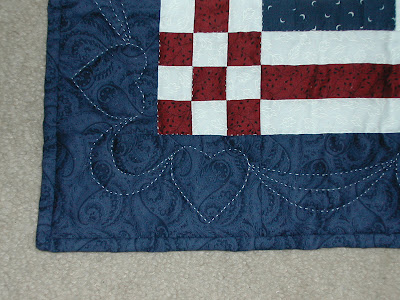 Here's another gift for a beloved teacher and I called it Red Schoolhouses, machine pieced and hand quilted. 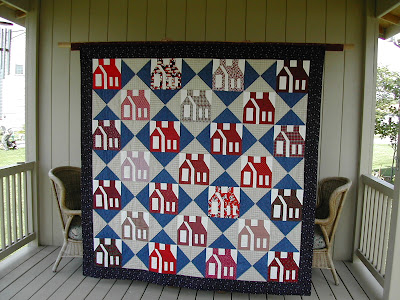 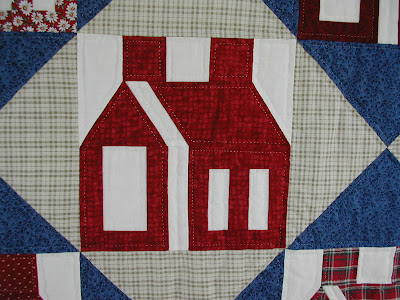 This is a Bagello Quilt wall hanging that is hanging in my living room...the skinniest "slice" is a quarter of an inch wide...YIKES!  It is machine pieced and hand quilted. 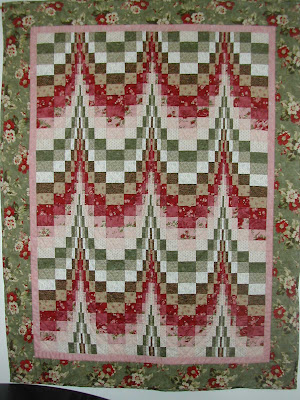 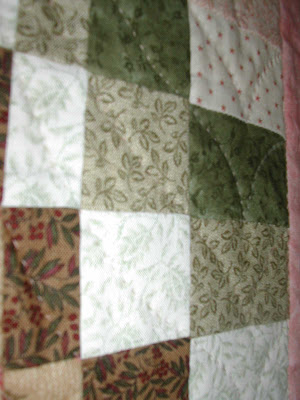 This next one was wild (for me!).  It was the wedding quilt for my youngest sister.  They got married on the beach in Destin, Florida on a perfect October day.  Their colors were the colors of the water of the Gulf of Mexico (teal, aqua, blues, greens)...and bright orange (for the Monarch butterflies).  I just made up something youthful and funky. 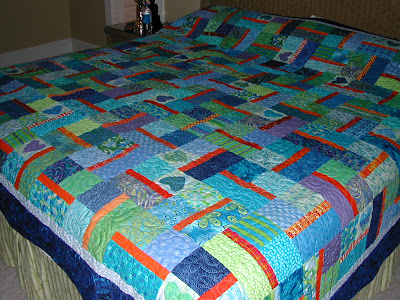 I hand appliqued some hearts and butterflies that I drafted (from hearts) on random blocks.  They picked October on a Florida beach in the pan handle of the state due to all the Monarch butterflies that are there at that time (hence the bright orange in their color scheme!).  They were flying all around during the ceremony...oh, so cool!  The quilt was machine pieced and quilted (along with the hand applique).  The colors are really brighter and more beautiful than my bad photography indicates.  I really enjoyed collecting all the fabrics for this scrappy quilt. 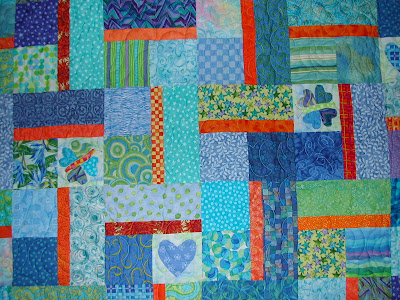 Well, that was fun...going down memory lane.  I always think of this blog as my quilting journal, but I've been making quilts since 1982 and have only been blogging a little over a year.  I've got a little more catching up to do when it comes to sharing projects (at least for the things I have pictures of)!
I hope to be through with baby Asa's quilt soon.  I have a lot of "quilt guilt" over it, as my nephew is now 6 months old.  Do you deal well with quilt guilt?  I hate it, but I have a hard time avoiding it.  This hand piecing, hand quilting stuff takes time, and sometimes life gets in the way of my quilting agenda.  I will definitely be doing a little happy dance when I finish it and can send it off to my very patient sister. 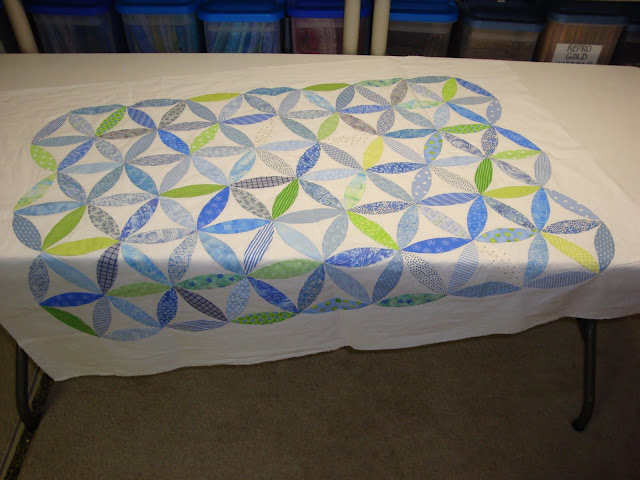 Wow...two posts from me in one day...it's either feast or famine lately, huh...
I talked earlier (today) about trying to finish this baby quilt for my nephew.  I still want to put a skinny light blue border on, followed by another narrow white one, then bind it in white.
What you see was all hand-pieced and hand-appliqued.  Once I figured out how to connect all my little circles (that were on square backgrounds...go figure), I ended up appliqueing the whole mess on white borders.
Thanks to Kellie at Don't Look Now for this "adventure" in quilting.  Her tutorials were great...I'm just an idiot.  I like the name of her blog...I will think of it every time I think about the messy back of this quilt top (as in, "oooo, 'don't look now'...at this messy back side of the top...).
When I get the other little borders on the top, I will show you the back side before I layer it all for the hand-quilting (and hide it all away forever and ever, amen).  Now THAT will be a humbling experience for me!  I always try so hard to press carefully so the back of my work doesn't look like a train wreck, but joining these round blocks on square backgrounds...let's just say it was like putting a square peg in a round hole.
The important thing is that I pushed through my mental block about this quilt and I will have it finished, layered, quilted, and sent on it's way to little Asa in no time!
In stitches,
Teresa  :o)
Posted by Teresa Rawson at Friday, August 20, 2010 5 comments: 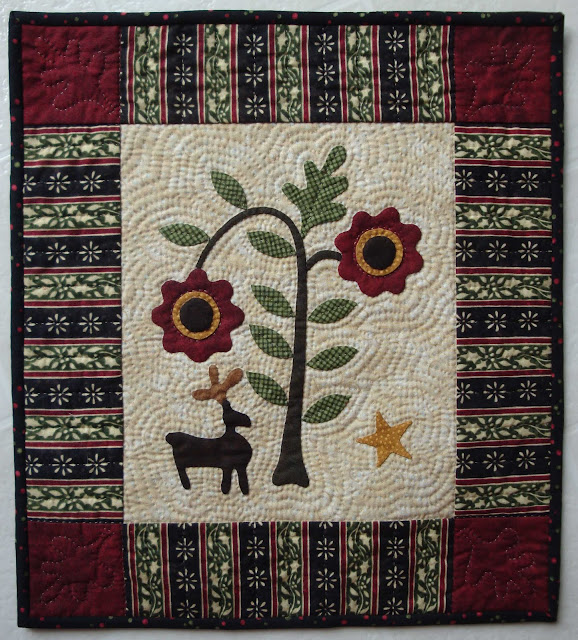 I finally finished hand-quilting and binding two small quilts from Barbara Brackman's Juniper and Mistletoe book.  These will be samples for the shop, then Christmas presents.  Ha!  That's ONE way to stop procrastinating on getting started on making gifts for Christmas 2010!  The first on is a block is from the sampler quilt featured in the books are "square"...it's just I'm a bad photographer!  LOL  I hand quilted little oak leaves in the cornerstones on the first one.

I used chocolate brown YLI quilting thread for the cardinal piece.  It's hard to see the quilting because it so closely matches the dark brown Maywood Shadow Play fabric I used for the applique background. 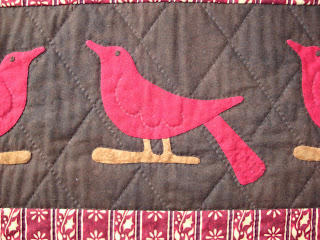 On an unrelated subject, have you ever started a project before you knew how it was going to end?  OK, that was a dumb question...we've all done that...duh!  Have you ever started something, showed your feeble efforts to the final recipient, then realized that you might not be able to finish it?  Then you put it aside because you can't face it, but you can't "scrap it" because the recipient is already excited?
I did this recently.  Remember the Joseph's Coat Quilt Along, sponsored, with tutorial, by Kellie at Don't Look Now??  I took one look at that awesome quilt and thought that it would make a darling baby quilt for my newest, soon-to-be-born nephew.  This project is supposed to look like this: 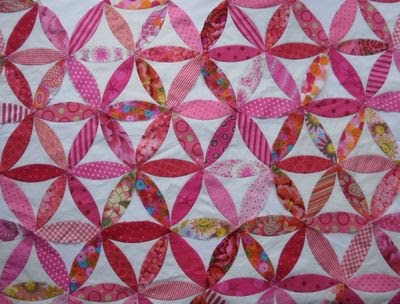 Kellie posted this first step of the tutorial in January and I thought it was INCREDIBLE and started cutting out little blue and lime green wedges.  I thought, "Wow!  I love this quilt!  The first step looks easy and I bet I can do this quickly and my sister will love it." 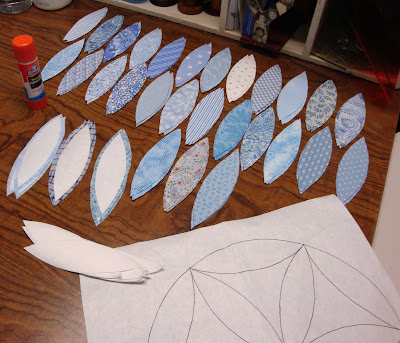 The first step was easy...look at my adorable "blocks"...I was ready for another tutorial step so that I could whip the thing out PRONTO! 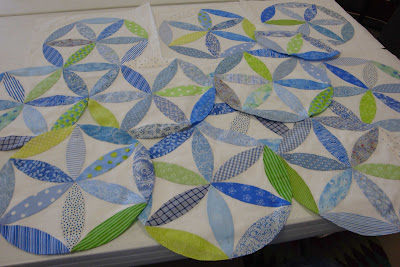 Then the next step was posted by Kellie...uh-oh...a little tricky.  I hit a brick wall.  I stuffed the project in a box and avoided it for a while.  I'm sure other people found the next steps easy and went on to make a huge, beautiful project.  I was only making a small baby quilt, and I was afraid to go on.
To add to my misery, I broke my number one quilting rule:  NEVER show a recipient their quilt before it is finished; it deflates creative energy (and commits you to that particular effort, even if you hit the wall, like I did).
Well, when I was visiting my sister and new nephew in February, I was working on step one, and she saw the "blocks."  Uh-oh!
Well, my adorable nephew is now 6 months old and I feel so guilty that I have not finished his quilt.  I made the decision yesterday morning to "put on the big girl panties," get the project out and work on it non-stop until it is done!
I am making GREAT progress and will post a picture of the top later this evening...I'm almost done with the top...and that is saying something...it is all hand-pieced!  I am so proud of myself for pushing through this and dealing with all the feelings of "I can't do it" and "I feel so guilty!" and "he won't get this until he starts college!"
(You know...it wasn't so bad doing it.)
We are our own worst enemies.
In stitches,
Teresa  :o)
Posted by Teresa Rawson at Friday, August 20, 2010 5 comments: 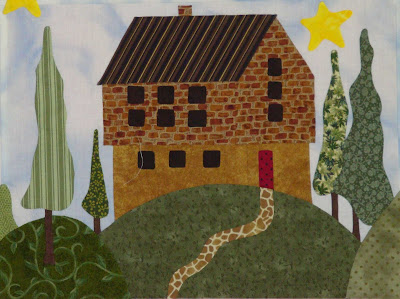 I've managed to get another couple of house blocks finished for my Around the Town quilt (by Sue Garmon)...I have not posted a block on this project since the end of May...my, how time flies!  The block above is block #4, called the "good as gold house."  And here is block #6.

And here are my first 6 blocks that make up the right side of the quilt:

This is the picture off the pattern... 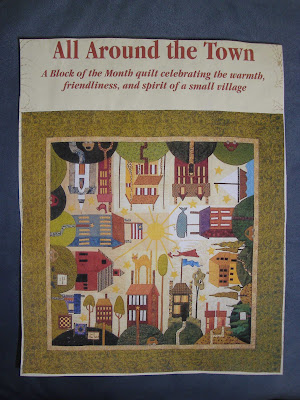 This was the first block...I loved the whale weathervane...that's what attracted me to the quilt in the first place. 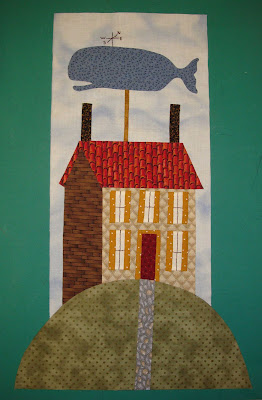 This is the right, top corner... 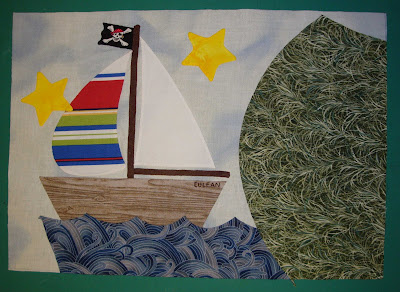 This is the gable house... 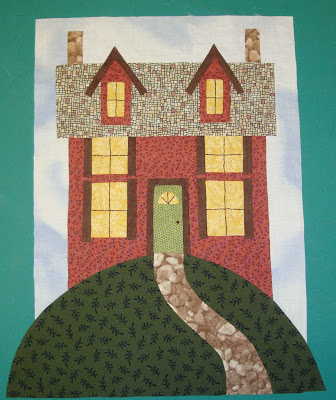 And this is the bottom, right corner, the "dark and skeery woods." 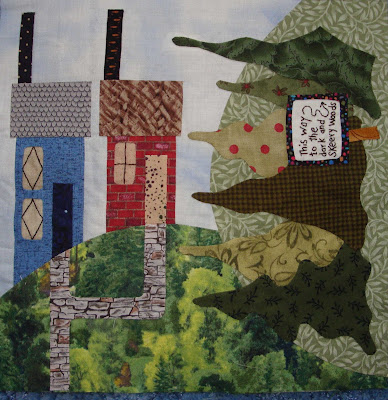 It has been fun getting to use the architectural fabrics I've been saving...stones, bricks, wood.
I've been choosing fabrics and prepping pieces of the remaining six blocks.  Maybe I will be more timely in posting another block!
In stitches,
Teresa  :o)
Posted by Teresa Rawson at Sunday, August 15, 2010 10 comments:

Labels: All Around the Town

Inspiration from the great outdoors...

It's good to be home again!  While camping in the Canadian 1000 Islands, I managed to do a little hand-applique by lantern light on two little samples for the shop.  Once home, I added the borders and now they are ready to quilt.  This tablerunner is 45-1/2 x 13-1/2.  Here's a closer view of the first one: 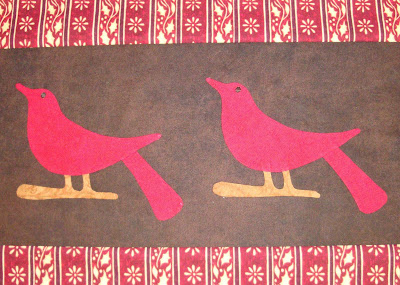 They are both from "Juniper and Mistletoe: A Forest of Applique" by Karla Menaugh and Barbara Brackman. 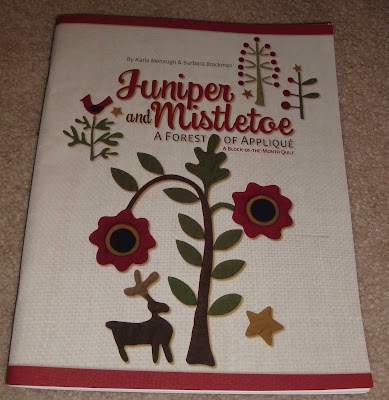 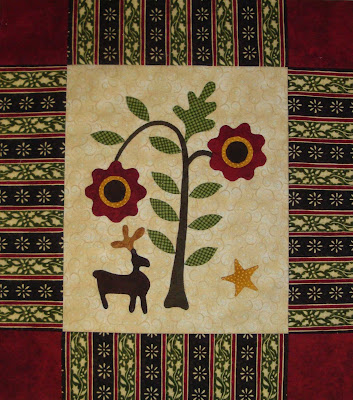 As I unpack and do all the camping laundry, I look forward to catching up with your blogs.
In stitches,
Teresa  :o)
Posted by Teresa Rawson at Wednesday, August 04, 2010 10 comments: