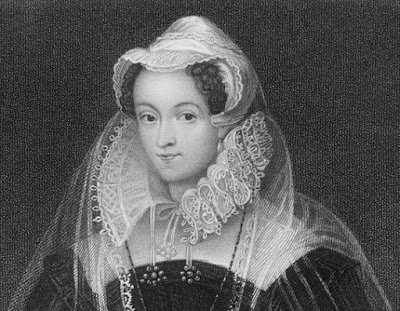 When Mary Queen of Scots was born in Scotland in 1542, the country was predominantly Catholic.  Being named the next in line to the Scottish throne at the age of 6 days made an already difficult political situation even more uncertain and confusing.

Scotland was trying to stay autonomous, England wanted to consolidate power, France was helpful to Scotland and was an enemy of England, and Spain was on the edges, threatening or supportive as it suited their needs.

Intrigues, alliances large and small, and regional differences in Scotland, England and France made strong, unified states difficult.  The pro-Protestant movement was quietly growing in England and France and Scotland were mostly Catholic.

The flower of our third block is one of the many in this project that is ambiguous.  While the newly-published Herbals of the time offered more accurate depictions of plants and trees, those drawing these on canvas for embroideries were influenced by whimsy and their own skills. 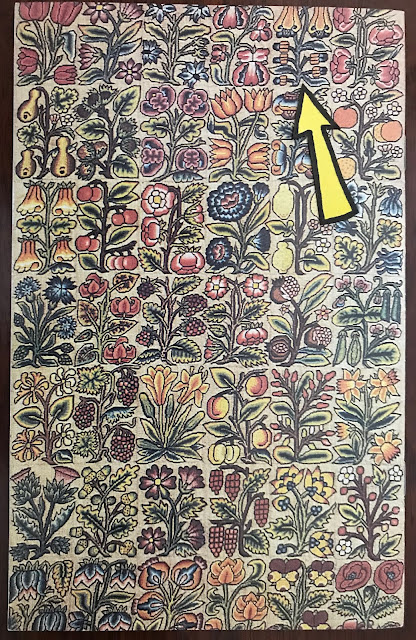 Canvas preparation only provided outlines.  The stitcher would choose colors themselves to match their own whims and desires.

This makes guessing the name of the flower and their intentions even more difficult to tease out. 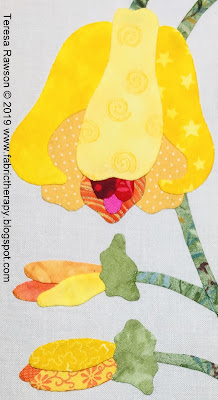 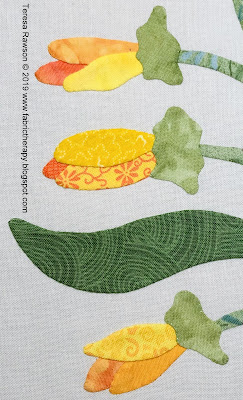 I have to admit that I, too, have taken some liberties with many of my blocks concerning color as compared to the original sampler.  One problem...blue is my favorite color.  True blue flowers are not as plentiful in nature.

Turns out that I am making some whimsical choices as well! 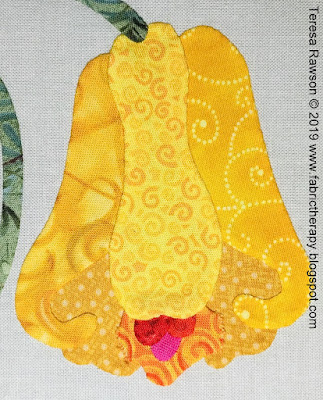 Since I am still making blocks and choosing colors, final block placement will have to wait. 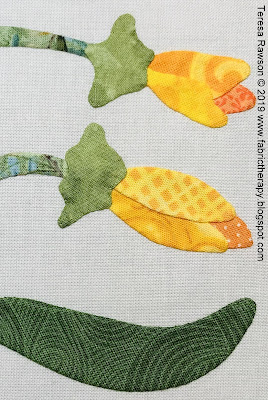 Here are the first three together! 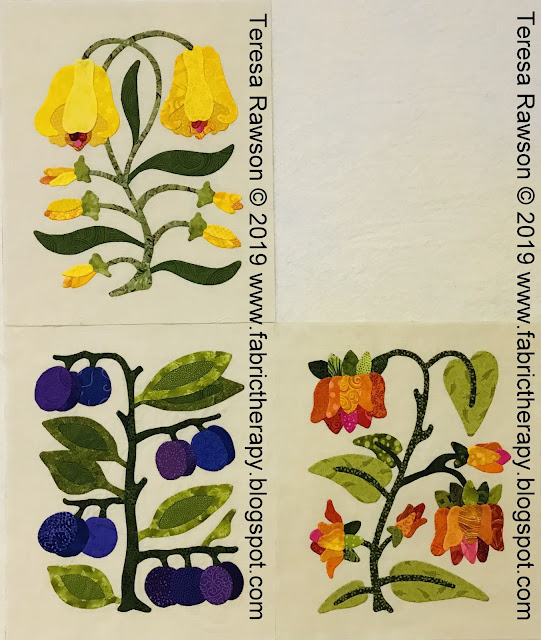 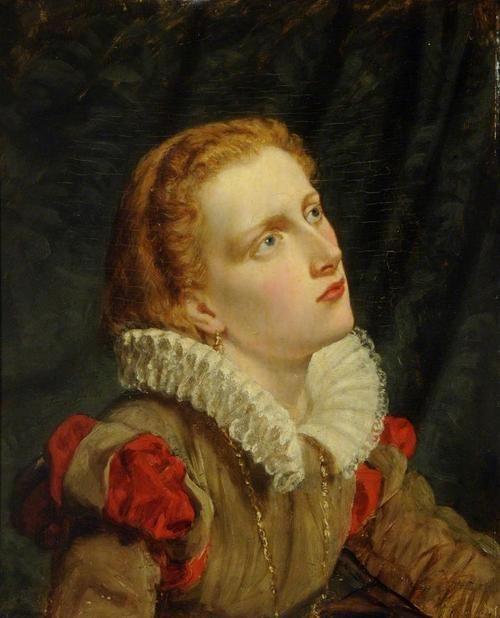 The blocks just keep on coming.  This tapestry is such a wonder and mystery to me. 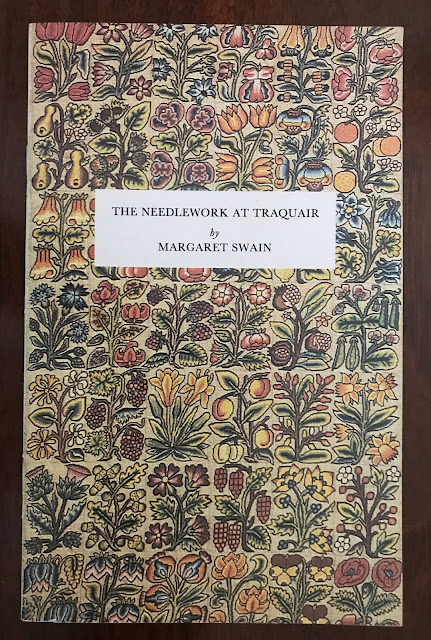 This is a little 5 x 8.5 inch booklet I ordered from England after seeing the above picture on the Internet.  The small, pamphlet-like  pages were published in 1984 by Traquair House, which is where the "slip" stitcheries were found and some are displayed.

The best picture, and only one in color, is the cover.  Oh, how I wish more pictures could have been taken, especially close ups!  I have ordered a few really old, falling-apart books on Amazon that have a few of the same pictures, mostly black and white, and a little more of the history.

Margaret Swain, the author of the booklet (now deceased), saw several pieces when touring the historic great house, Traquair, in Scotland.  She loved embroidery and stitchery.  There was interest in these linens as stitchery patterns.  In fact, several of the flower slips were charted for needlepoint in the 1970's.

The needlepoint charts may still be for sale through the Traquair House. 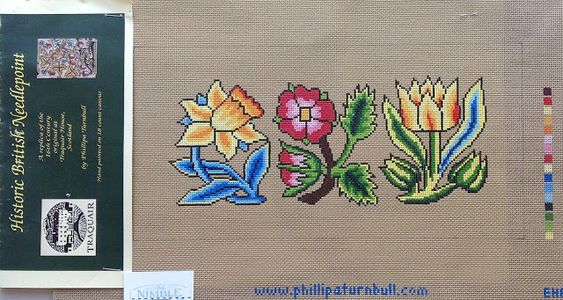 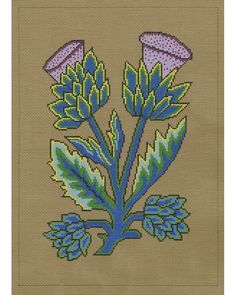 Here is an antique slip from Mary's time.  When trimmed, the narrow edges are turned under, ready for stitching on a large bedding or apparel piece.
Much easier to work the intricacies of the tent-stitched slips on small pieces of canvas.  The actual whip-stitching to the larger fabric pieces comprising the bed hangings and such would not require much effort each, and would be hidden. 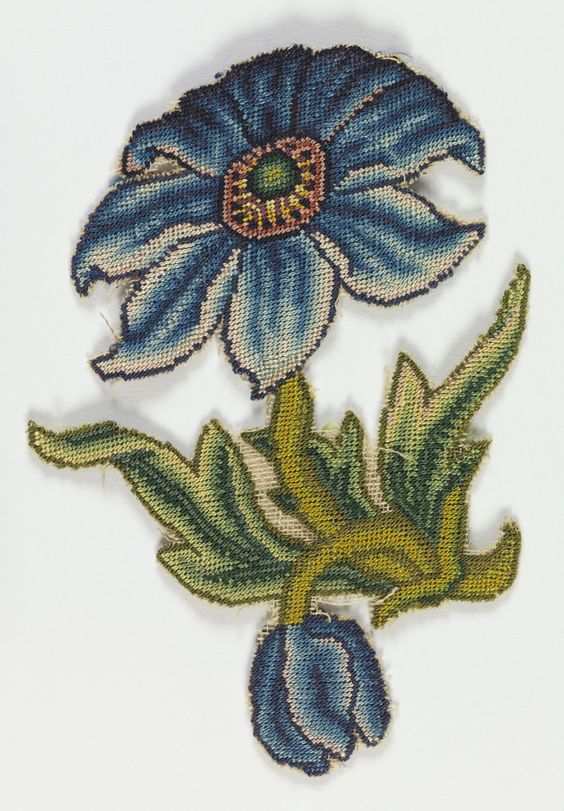 The color on this piece is pretty good...probably put away, out of the light, in the early 1600's, until it was needed.

I have used an arrow to point out my first block attempt below.  I posted that block last time.  I wasn't sure what kind of fruit the block was meant to be (as they look reddish-orange), but I made mine purple plums. 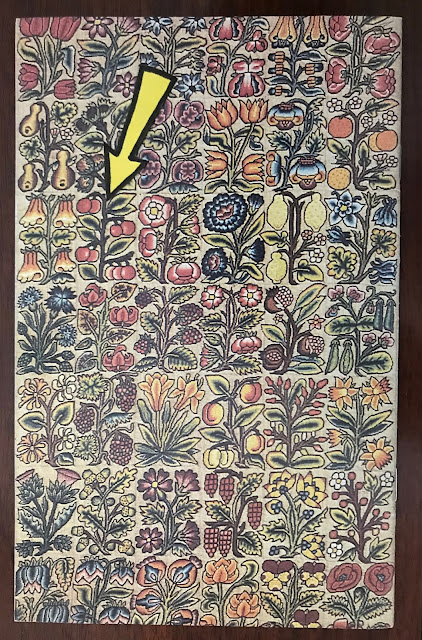 I chose to make some of my plums with 2 fabrics, hoping to represent some perspective...not sure if I succeeded. 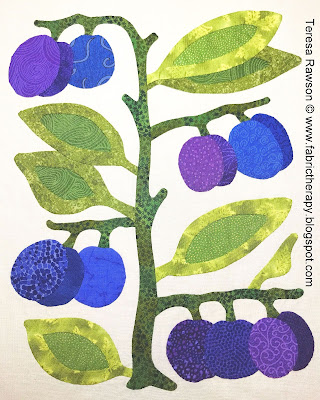 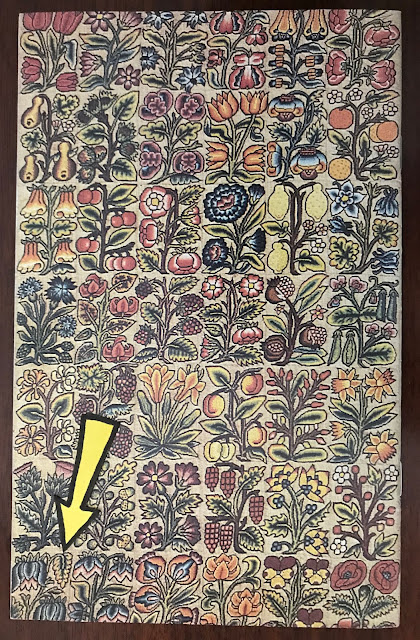 Some rows on the top and bottom of the sampler piece are cut off, so I had to do some drafting guesses to make on this next block... 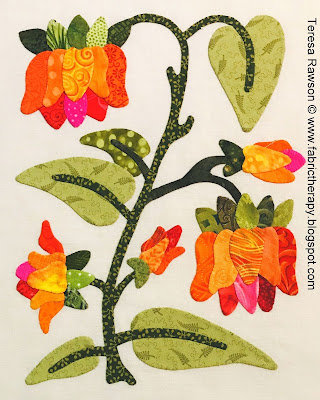 As they are stitched, I have been placing them on the design wall in no particular final setting.  I will trim the blocks so that there is a small strip of blank space between them.  They will not be touching and on top of each other, as in the original utility sampler. 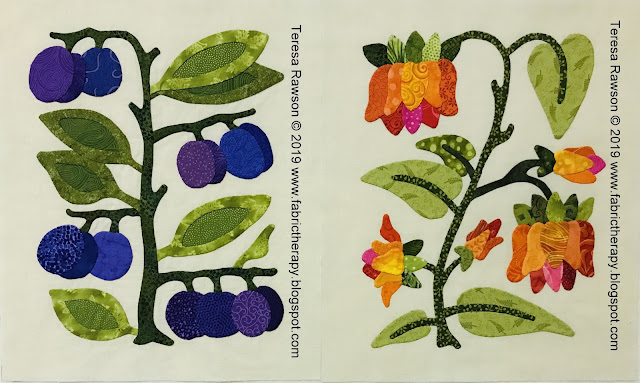 Some of my blocks will have reverse-appliqued leaf veins, like below.  They can be worked with the centers appliqued "on top," or even as a solid leaf if wished.

And to be honest, as I find myself guessing about which flower the canvas marker was depicting; the leaves either aren't the right ones for my guesses...or for my wishes.

I'm sure the herbalists had the proper leaf shape drawn in their scientific journals, but many of the court canvas markers mostly took liberties with the emphasis being on design rather than biological accuracy.

I mean really, how many of us actually know the shapes of proper flower leaves, except maybe our favorites. Those of you with a green thumb are probably frustrated by their...and my...design choices. 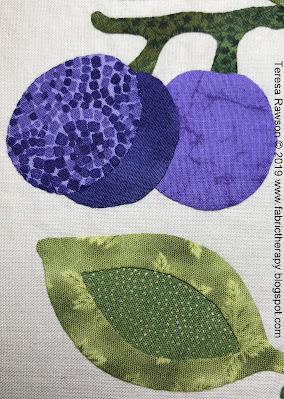 I tried to make leaves or stems that were in the background darker than the foreground, again for shadowing and perspective. 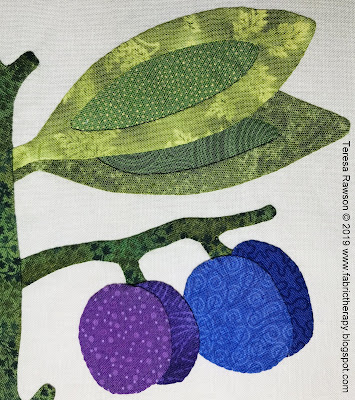 Mary Queen of Scots, did stitch this kind of flower/fruit slip in later years, but mostly as a young lady.  As an older royal, she had a small team of ladies who made the more utilitarian domestic and clothing items while she and her smaller circle of ladies worked on quite impressive medallion wall hangings (I will show some of this work soon).

She was quite the clothing and fashion maven.  Most of the info about her that I have found has been inventories of her gowns, clothing, jewelry, baubles, embellishments, and bed linens. These inventories were made and recorded every time she moved, which was constantly.

She had a smaller, close group of ladies and attendants, including Lady Bess of Chadwick.  They traveled with their lady to and from houses and castles while Mary was under house arrest by her cousin Catherine, Queen of England.

There could only be one Queen, and Scotland was to be ruled by England and the English cousin, Catherine.  Mary, who also had claim to the English thrown, was also a Dowager Queen of France (second behind Catherine de Medici, her mother-in-law.)
Being Catholic was also a disadvantage for Mary.

On to the next block!

In stitches,
Teresa   :o)
On another thread...
I seem to be like a member of the ferret family..."pop goes the weasel!"  I come to my senses, realize that it has been a long time since the last post, then "POP," here I am!

"What has she been up to??"  I've been learning some important lessons.

1)  I've learned that poison ivy is not just a short, annoying growth around your ankles...it can be an invasive vine that covers beautiful hardwood trees.  Who knew? And it is just as toxic in the winter when you can't look for the three leaves.  I have been trying to free some beautiful oak trees, so I've been miserably itchy, ugly, and on steroids (not to mention, in a really CRAPPY mood for the duration).  I have been "rough and tough and hard to diaper."

2)  I realized that my annoying double vision has less to do with the quality of the current pair of glasses, but caused by cataracts.  The cataract in one eye took me from -13 to -18 in my right eye in the matter of months. Hopefully there will be surgery between Riley's college graduation and blueberry picking season.

This may have also been messing with my perception of color and my opinion that none of my camera choices take good quilt block pictures.  Hand sewing has been a very tough task due to fuzzy and double vision.

3)  A wet, windy winter has meant a lot of removal of downed limbs and trees.  I'm also coming to the realization that a lot of the maintenance of this sibling-shared legacy property is going to fall to me and my husband, who still works, so...to me.

4)  Dealing with Father-in-law's continuing decline due to Parkinson's in the Philadelphia area.

5)  Coping with changes around doses and kinds of medications that I started taking after my parents were killed in the accident.  I'm still trying to find the right cocktail for me.  Some dull my creativity, which is unacceptable and frustrating.  What a roller coaster!

I know many of you struggle with something from my list and many others.
God bless all of you!
Posted by Teresa Rawson at Tuesday, April 09, 2019 19 comments: