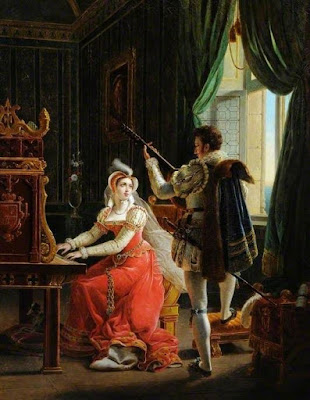 Mary Queen of Scots' life is getting rather complicated following her return from France to England.  As the now seated Queen of Scotland, she was young, powerful, and beautiful with a determined strength and vigor.  She was certainly strong and smart enough to be Queen.  Her next husband would not officially be a Scottish King, but a King consort.
Growing up in the French Court, she was encouraged by her de Guise Uncles and King Henry II (the father of her betrothed Dauphin Francis II) to join discussions.  She had the freedom to express her own opinions, even in political matters.  Her exposure to this rare, female opportunity gave Mary the knowledge and confidence to go home and assume her thrown. 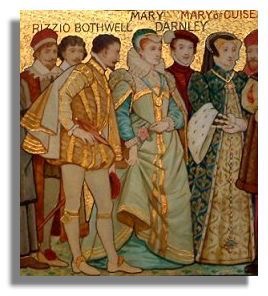 Current, and future, cast of characters (from left to right):
Rizzio, Mary's secretary and closest confidant
Everyone had an idea of who Mary's second husband should be. Her advisors were, of course, thinking only of politics and Scotland's allies/enemies list.  England and Queen Elizabeth had their own ideas and even had men "planted" into Mary's inner circle, acting as influencers and providing intelligence.  Elizabeth was still concerned about Mary's "Stuart legitimacy" claim to the British throne and was intimidated by her strength and popularity.
Of course, the de Guise side of Mary's family had matrimonial plans for her as well.  Mary's mother, Marie de Guise of France, had come to Scotland to act as Reagent "place keeper" for Mary.  After all, she was barely born when the death of her father had left her the throne.  Mother Marie had powerful brothers in the French court which kept France's interests at the forefront.
France, as a fellow Catholic country, was a strong ally with Scotland.  They needed each other's support against England, now Protestant following Henry VIII's "divorce national conversion."  England wanted to stamp out Catholicism in the region. 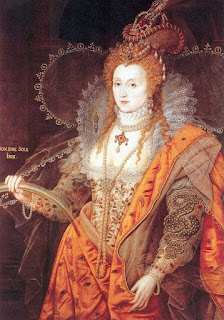 Edenborough was fairly strongly Catholic, but outlying Scottish Clans sort of did their own thing.  They basically wanted to be left alone, not wanting to work together against the English.  The clans were too busy stealing and fighting with each other.
There were skirmishes near the border with England.  Mary would ride out with her soldiers in battles.  It is said that Mary was not totally opposed to Protestantism, she mainly wanted to be able to be a strong, practicing Catholic herself.
Then, there was her older half-brother...he had gained some support for being the rightful King before Mary returned home to Scotland.  He was trying to undercut her authority and had his own band of soldiers. 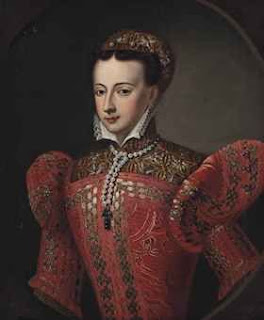 It is said that the King never even saw his daughter Mary as he was near death and she was born hours after he died.  Then, there was Mary's right to the thrown...she was the king's legitimate heir.  Her older brother was only a half brother, which was also a thorny situation.
But what about love?  Mary was pushed and pulled and finally ended up marrying Lord Darnley.  It is thought that Darnley was pushed into the marriage merry-go-round by Queen Elizabeth and her advisers.

ROW FIVE is done and on the design wall.  My bedroom design wall is smaller than the one in the basement...I've about reached its limit. 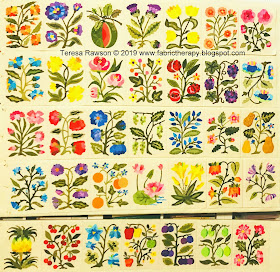 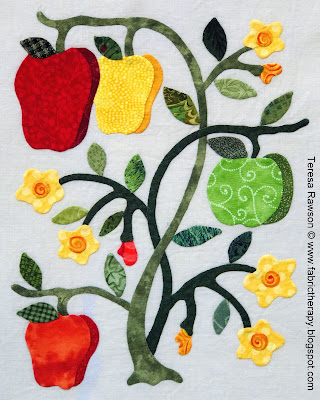 Eight more blocks, then on to the nutty bird border!  I am trying to control myself drawing the birds, but they are all based on 16th-17th century art, manuscripts, and embroideries.
I'm finding it hard not "fixing" the drawings to be less fanciful and more "normal."  It's a challenge for me to be faithful to the interpretations of flora and fauna by the artisans and crafters from that time period...I want things a little more anatomically accurate, I guess.
And the wild colors they used...yikes!  Although, I have to admit reproducing mystery flowers and birds in unnatural, unusual colors has been freeing!
From the little bit I've read about the lives of that era, an embroidery project using bright silks was probably a big help coping and balancing some of the daily difficulties.
In stitches,
Teresa   :o)
On another thread...
I am still here!  I have my second Covid-19 shot this week, but I am in a state where the split between vaxed and not-vaxed is about 50/50.  So I am still mostly stuck at home with my post-pneumonia sensitive lungs, heart arrhythmia, etc.
I am so jealous of all of you getting so much done during the shutdown!  Being under house-arrest for 12+ months and the whole 2020 year made me feel so helpless.  It totally interfered with my creativity, which leaves me depressed and irritated.
I missed my 92-yr-old beloved aunt, siblings, nieces and nephews, quilt guilds, quilt shows, traveling to Michigan to see friends, etc.  SO many small businesses closed in the Shoals area...even some major chain restaurants and stores.
Here's to getting out and getting back to normal (and feeling more joyous)!!